Browns wide receiver Josh Gordon has been reinstated, the NFL announced today. However, Gordon will be suspended for the first four games of the 2016 season and his return will be conditional. Gordon must continue with his treatment plan in order to be allowed back for Week 5. In the interim, Gordon will be permitted to play in preseason games. During the suspension, he will also be allowed to be in team meetings. 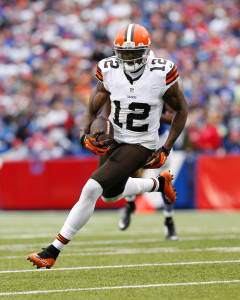 Since his entry into the league in 2012, Gordon’s NFL career has been tumultuous to say the least. He missed the first two games of the 2013 season following a drug suspension, but then went on to lead the NFL in receiving yards, finishing with 87 receptions for 1,646 yards and nine touchdowns. Gordon celebrated his 25th birthday this offseason.

Hopes were high for the 2014 season, but Gordon’s off-the-field issues resurfaced, as he was first arrested for DUI, and then suspended for one year after again violating the league’s substance-abuse policy. He was eventually reinstated after only 10 games as part of the NFL and the players’ union agreeing to a new drug policy, which reduced the sentences for some players-in-limbo.

Now, Gordon must demonstrate that is exercising better judgement in order to see the field again. He must also make a strong impression on new coach Hue Jackson. Ultimately, it is Jackson who will decide whether the wideout fits into his program. If not, the Browns could theoretically trade or cut Gordon.