TUESDAY, 3:26pm: Amerson’s deal is not quite as strong as early reports had indicated. Despite being described as a deal worth as much as $38MM with nearly $18MM in guarantees, it would be more accurate to say that Amerson’s true guarantee is really $5.5MM, according to PFT’s Mike Florio. Here are the full details:

Amerson is guaranteed $5.5MM at signing plus rolling injury-only guarantees of $12MM. Technically, the deal has a maximum value of $38.38MM, but Amerson would have to be named to the Pro Bowl in each of the next five years to actually realize $4.5MM of that number.

FRIDAY, 4:28pm: Raiders cornerback David Amerson became the latest NFLer to cash in Friday afternoon, agreeing to a four-year extension worth as much as $38MM, including nearly $18MM in guarantees, according to Ian Rapoport of NFL.com (Twitter link). 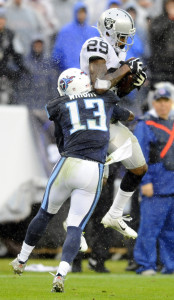 On a day highlighted by big-money deals awarded throughout the league, Amerson’s pact is somewhat modest. However, it’s a tremendous payday for a player whom the Raiders claimed off waivers in late September and one who was set to make a little over $880K in 2016, a contract year.

Amerson, whom the Redskins cut between the second and third weeks of last season, quickly found a home in Oakland and became its best cornerback. The 24-year-old started in 12 of his 14 appearances with the Raiders in 2015 and piled up 58 tackles and a career-best four interceptions. Amerson’s performance earned him high praise from Pro Football Focus (subscription required), which ranked him 14th among 111 qualifying corners.

Given his draft pedigree – Amerson was a second-rounder in 2013 – it’s not a complete surprise that the ex-North Carolina State standout has turned into a quality pro. And Amerson wasn’t exactly inexperienced prior to donning the Silver and Black, having totaled 23 starts in 31 appearances in his two full seasons with the Redskins.

Amerson had a rather difficult time in Washington, though, particularly when PFF rated him as the worst corner in the league in 2014. Nevertheless, the former 51st overall pick developed into a force last year in Oakland, which has rewarded the 6-foot-1, 205-pounder handsomely as a result and will keep him in the fold as part of an impressive core of 20-something defenders. Along with Amerson, the Raiders’ defense is built around the likes of superstar end Khalil Mack, linebacker Bruce Irvin, fellow corner Sean Smith and first-round safety Karl Joseph.

One comment on “Raiders, David Amerson Agree To Extension”