Panthers To Work Out Stevie Brown

Donte Whitner isn’t the only safety the Panthers are working out. Stevie Brown, who was released by the Chiefs earlier this week, will join him, according to Ian Rapoport of NFL.com (on Twitter). 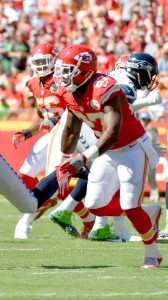 Brown was without an NFL gig in 2015, despite his past success. A seventh-round pick of the Raiders in 2010, Brown posted a career year in 2012 as a member of the Giants as he hauled in an eye-popping eight interceptions. However, he failed to register a pick in each of his other three seasons – one apiece with the Giants, Raiders and Colts. Brown signed with the Chiefs in early April but he became an early roster casualty when he was dropped on Wednesday.

While Whitner could conceivably leapfrog Tre Boston as the Panthers’ starter at free safety, someone line Brown is probably being looked at for a supporting role. Boston only partook in 20 percent of Carolina’s defensive snaps last season, so it makes sense to put some additional experience behind him.