Brought in to kick last season due to Matt Bryant‘s injury trouble, Shayne Graham will return to the Falcons after reaching an agreement to re-sign, Darin Gantt of Pro Football Talk reports. 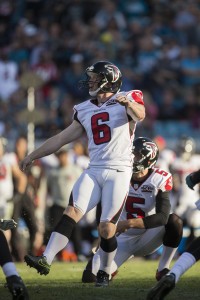 Bryant’s been sidelined as of late with muscle tightness, opening the door for the 38-year-old Graham to return, at least for the time being.

Graham has now been a two-time employee of the Falcons and Saints after having spent his second season (in 2002) with the Panthers. He’s most known for the seven-season stay in Cincinnati. Graham kicked for the Bengals from 2003-09 and earned his only Pro Bowl bid in southwest Ohio, booking the Hawaii trip in 2005.

The Saints re-signed Graham in February of 2015 after having deployed him as their kicker from 2013-14 but cut him last May. Graham then caught on with the Falcons in late November and played in six games, making 11-of-13 field goal tries and all eight of the extra points he attempted.

Since departing Cincinnati after 2009, Graham’s only enjoyed full-season stints in two of the past six years — with the Texans in 2012 and Saints in ’14. In between, he spent time with the Patriots, Giants, Dolphins and Ravens.