The Redskins have cut both inside linebacker Perry Riley Jr. and defensive end Stephen Paea, a source tells Mike Jones of the Washington Post (on Twitter). The Redskins will save a substantial amount of money against the cap by cutting both players. 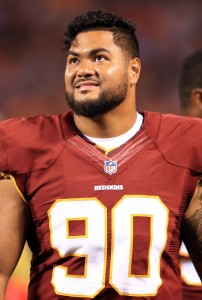 Riley was slated to make a little more than $5MM in the coming year while Paea was to make $3.3MM plus bonuses. By getting rid of the duo, the Redskins will save upwards of $5MM in total, though most of that comes from the $4MM saved by dropping Riley.

Paea started just one game for Washington in 2015 after getting 40 starts in his previous three years in Chicago. While his part-time role limited his overall numbers (19 tackles, 2.5 sacks), Paea was solid during his time on the field, ranking as Pro Football Focus‘ 45th interior defensive lineman, out of 128 qualified players. The Redskins decided that they would rather eat most of the money owed to him for the coming season, however.

There wasn’t a place for Riley this year as the Redskins are slated to have Will Compton will start at inside linebacker next to Mason Foster. Riley could have been an effective sub, but not at his rate.