3:16pm: The Seahawks hosted Jahri Evans on a visit Friday and saw enough to sign the former perennial All-Pro guard, announcing the signing on Saturday. They waived guard Kona Schwenke to make room on the roster. 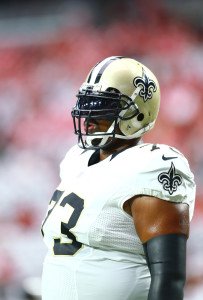 Despite Evans’ stellar run of play with the Saints, he did not generate consistent interest this offseason, visiting the Bills in March and then four months later making a trip to Seattle. The Seahawks’ offer, we heard earlier, wasn’t believed to be anything substantial. But the 33-year-old guard agreed to join a line that lacked for veteran talent.

The Seahawks lost both Russell Okung and J.R. Sweezy this offseason and were set to enter the preseason with Mark Glowinski and 2016 first-rounder Germain Ifedi as their projected starting guards. Evans is no longer the player who booked four straight All-Pro honors from 2009-12 but has been a consistent presence in lineups and looks to be an upgrade for the otherwise-well-stocked Seahawks.

Evans started 16 games in a season eight times in his 10-year career, with the outliers being 2013 and ’15, when he logged 14 and 11 starts with New Orleans, respectively. He missed five games last season due to arthroscopic knee surgery.

His 153 starts are 17 more than the rest of the Seahawks combined, as Bob Condotta of the Seattle Times notes. Formerly a third-round pick out of Division II Bloomsburg, Evans consistently lined up at right guard with the Saints. Ifedi currently slots in there for the Seahawks, but the former Texas A&M blocker has extensive tackle experience. Journeyman J’Marcus Webb is tentatively projected to start at right tackle for Seattle.

The Seahawks entered Saturday with $8.8MM in cap space, however, they do not have a notable veteran contract on their offensive line. They’ve notably allocated most of their resources to fortifying their homegrown defense, along with the chief cogs in charge of elevating the passing game.

Evans’ exit path out of Louisiana came after he refused to take a pay cut after doing so for the Saints in 2015. He was set to carry an $8.2MM cap figure for the Saints this season. He almost certainly won’t approach that figure in Seattle.