Could the Browns lose two quarterbacks in two weeks? That’s the fear in Cleveland right now after Josh McCown hurt his left shoulder on Sunday. The team expects him to be “out awhile,” though they’ll have a better handle on his condition after he gets an MRI done today, Mary Kay Cabot of The Plain Dealer writes. 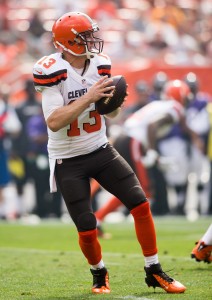 If McCown has to miss multiple games, the Browns can be expected to look out-of-house for quarterback solutions. In theory, third-round rookie Cody Kessler is the next man up and the team is said to be happy with what they’ve seen out of him this offseason. However, despite the promise he has shown and the veteran guidance he has received from McCown, he may not be ready for live action just yet. The Browns do have rookie Kevin Hogan on the taxi squad and wide receiver Terrelle Pryor has quarterback experience, but neither one presents a better option than Kessler.

McCown, 37, went 1-7 as a starter for the Browns last season. In his one game under center for Cleveland this year, the veteran completed 20 of his 33 passes and threw two touchdowns with two interceptions. Next up for the Browns is a Sunday road contest against the Dolphins.

One comment on “Browns’ McCown To Miss Significant Time?”