Aaron Dobson‘s NFL tour continues. The wide receiver will audition for the Chargers today, according to Michael Gehlken of U-T San Diego (on Twitter). 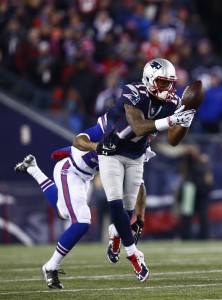 For those of you keeping track, Dobson worked out for the Jets last week, tried out for the Eagles on Monday, and auditioned for the 49ers on Tuesday. The Bolts took a look at wide receivers Chris Givens and Griff Whalen yesterday, but Dobson did not participate in that workout due to his Niners scheduling conflict. The Patriots waited for Dobson to break out for three seasons but they decided earlier this month that they could not wait any longer for the former second-round pick to shine.

After losing wide receiver Keenan Allen for the season, the Chargers are scouring the free agent market for options. Of course, they won’t find anyone that can replicate Allen’s production, but they could probably use some additional depth behind receivers Tyrell Williams, Travis Benjamin, Dontrelle Inman, and Isaiah Burse. The Chargers were already looking thin after Stevie Johnson’s injury and Allen’s torn ACL only thinned out that group even further.