After the Lions placed running back Ameer Abdullah on injured reserve Wednesday, Jason McIntyre of The Big Lead reported that the team was considering signing free agent Ray Rice (Twitter link). That won’t happen, however. 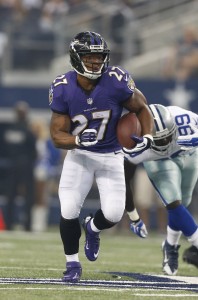 “We are NOT signing Ray Rice, never have even discussed him. 1000% false,” a Lions executive told ESPN’s Adam Schefter via text message (Twitter link).

The 29-year-old Rice is familiar with Lions head coach Jim Caldwell, who was the Ravens’ offensive coordinator from 2012-13. Those were Rice’s final two years in Baltimore, where he spent six seasons and rushed for over 1,100 yards in four individual campaigns. Rice has been out of the league since the Ravens released him in September 2014, when video of him knocking out his then-fiancee in a hotel elevator surfaced. Rice has seemingly cleaned up his act off the field since, leading Schefter to report on opening weekend that the three-time Pro Bowler could receive another chance sometime this year.

Rice’s potential next opportunity won’t come with the Lions, who are wary of adding any figures with controversial pasts to their team, Mike Florio of Pro Football Talk writes. Rookie general manager Bob Quinn said during the offseason that Detroit wanted no part of players connected to “domestic violence and dangerous weapons,” but he then went against his word in signing tight end Andrew Quarless in August. Quarless previously earned a two-game ban for discharging a gun in public in July 2015. That suspension is now over for Quarless, whom the Lions released this week.

Without Abdullah, the 1-1 Lions are set to rely on Theo Riddick, Dwayne Washington and Zach Zenner at running back. They did work out one of their former backs, Joique Bell, on Tuesday, though no deal has materialized. Aside from Rice and Bell, other notable rushers who are currently unemployed include Karlos Williams, who’s halfway through a four-game suspension for substance abuse, and C.J. Spiller.