The Chargers announced today that they’ve promoted wide receiver Isaiah Burse from the practice squad in advance of Sunday’s game against the Broncos. Cornerback Pierre Desir has been waived in a corresponding move. 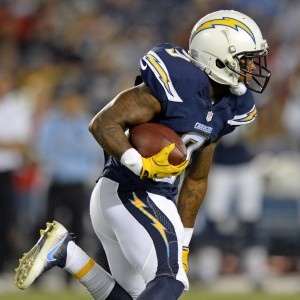 Before the addition of Burse, San Diego had only four wide receivers on its depth chart, with Tyrell Williams, Travis Benjamin, Dontrelle Inman, and Griff Whalen making up the club’s pass-catching unit. Two of those receivers are listed as questionable for Sunday’s contest, as both Williams and Benjamin are battling knee injuries. However, both players appear “on track” to play in Week 8, according to Eric D. Williams of ESPN.com.

Burse, 24, has 13 games of NFL experience under his belt — he played in one contest with the Chargers last season, and spent 12 games on Denver’s roster the year prior. He’s never caught an NFL pass, and has mostly contributed as a special teams player. Burse was the Broncos’ primary punt returner in 2014, averaging 7.3 yards per return on 29 chances.

Desir, 26, was waived by the Chargers last Saturday before being brought back into the fold the following Monday. He’s appeared in five games for San Diego this season, but has played on only 22 defensive snaps — he’s managed another 37 on special teams. With Desir out of the picture, the Chargers will head into their divisional matchup with Brandon Flowers, Casey Hayward, Craig Mager, Steve Williams, and Trevor Williams in the defensive backfield.