8:36pm: Misi might require spinal fusion surgery, the same operation that Peyton Manning famously underwent, tweets Ian Rapoport of NFL.com. However, Misi will first see if rehab is able to stave off surgery.

6:01pm: The Dolphins have placed linebacker Koa Misi on injured reserve, the club announced today. Misi is dealing with a neck injury, and one source told Armando Salguero of the Miami Herald that the issue could threaten Misi’s career. 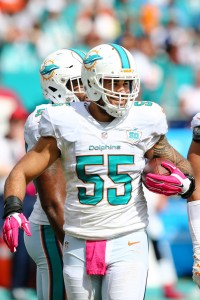 Misi, 29, has seen one specialist thus far and is expected to seek multiple opinions, according to Salguero, who calls the transaction “shocking” given that Miami had given no indication that Misi’s injury could lead to the end of his season or his career. Misi appeared in the first three games of the this season, but was forced leave in Week 3 when he suffered the original injury.

Though Misi would be eligible to come off IR in Week 13, that scenario seems wholly unlikely for multiple reasons. First, if Misi’s injury is possibly career-ending, there would likely be a danger in returning too quickly even if the ailment is not deemed as serious as perceived. Second, the Dolphins are more likely to bring back defensive tackle Earl Mitchell off IR, who can return in Week 8, per Salguero.