The Giants announced that they have released kicker Josh Brown. The Giants have issued the following statement from team president John Mara: 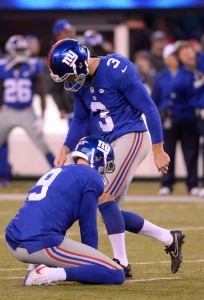 We believed we did the right thing at every juncture in our relationship with Josh. Our beliefs, our judgments and our decisions were misguided. We accept that responsibility. We hope that Josh will continue to dedicate himself to rehabilitation, and to becoming a better person and father. We will continue to support him in his efforts to continue counseling, and we hope that Josh and his family can find peace and a positive resolution. We have great respect and feel strongly about our support for the good people who work tirelessly and unconditionally to aid the victims of domestic violence and who bring awareness to the issue. We have been partners with My Sisters’ Place (a domestic violence shelter and advocate based in Westchester, New York) for nearly 20 years. The leadership of that organization has provided invaluable insight as we have considered our decisions in this matter. We value and respect their opinion, and we look forward to continuing to work with them in the future.

The Giants’ decision to release Brown comes shortly after the team met with the kicker. Earlier today, Brown issued a statement in which he took some responsibility for his “abuse” of his ex-wife while denying that he ever struck her. In time, Brown will likely be cleared by the league office to play again, but at this point, it is hard to see another team ever signing him. Barring any new revelations in his favor, Brown’s career in the NFL is probably over.