The Ravens have waived offensive lineman Billy Turner and promoted inside linebacker Patrick Onwuasor to take his roster spot, according to Jeff Zrebiec of the Baltimore Sun (Twitter links). 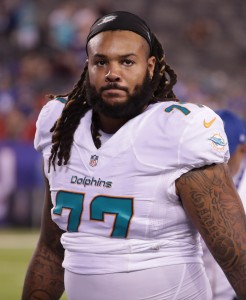 Two teams have now cut Turner this week. The Dolphins waived the soon-to-be 25-year-old on Tuesday after failing to find a taker via trade for him, leading the Ravens to claim him Wednesday. A 2014 third-round pick, Turner amassed 20 appearances and 14 starts during two-plus years in Miami. Through five games and two starts this season, Pro Football Focus rates Turner as the second-worst tackle in the NFL among 76 qualifiers.

Onwuasor signed with the Ravens in May as an undrafted free agent from Portland State. He’ll now make his pro debut as primarily a special teamer, per Zrebiec. Football Outsiders ranks Baltimore’s special teams unit a below-average 20th in the league.