The Chargers’ injury woes are now no longer confined to playing surfaces, with in-season signing Dexter McCluster suffering one at his home. 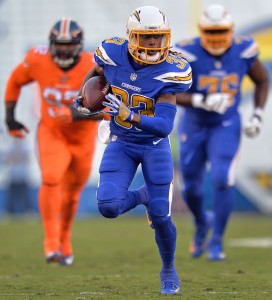 One of the Bolts’ backup running backs, McCluster broke his forearm while moving luggage at his house, Michael Gehlken of the San Diego Union-Tribune reports. He will miss the rest of the season as a result.

McCluster suffered the injury Friday night, and an X-ray this morning revealed a broken arm. The Chargers placed the scatback on the non-football injury list and promoted wideout Isaiah Burse from the practice squad.

San Diego signed McCluster because of Danny Woodhead‘s torn ACL injury and deployed him for the team’s subsequent game. After losing Woodhead, Branden Oliver and now McCluster, the Bolts are now down to Melvin Gordon and Kenneth Farrow as their only healthy ball-carriers. They do have Andre Williams on their practice squad but have yet to activate the former Giants occasional starter.

The Chargers have endured a rough run of injuries the past two seasons and are without several key pieces of their offense this season, with Keenan Allen and Woodhead being the biggest losses.

A former Chiefs second-round pick in 2010, McCluster has played in all six of the Bolts’ games since signing in late September. He caught seven passes for 36 yards in his seventh season. It looks to be the first slate where the diminutive back won’t haul in at least 20 receptions. The 28-year-old back twice recorded 50-plus-catch seasons with the Chiefs in 2012-13 en route to signing with the Titans, who cut him prior to the start of this season.

However, the Chargers have used their in-season signing on both kick and punt returns, where he replaced Travis Benjamin, so this wounds the embattled team more on special teams than it might offensively. Farrow, though, has no receptions this season, leaving Gordon as the only reliable pass-catcher out of the backfield.