10:42am: Rob Demovsky of ESPN.com cautions that Bell is only expected to work out for the Packers tomorrow. He suggests that no deal is imminent at this time

09:18am: It appears as though Joique Bell‘s tour of the NFC North will continue. Ian Rapoport of NFL.com tweets that the Packers are expected to sign Bell, who has also suited up for the Lions and Bears, on Monday. 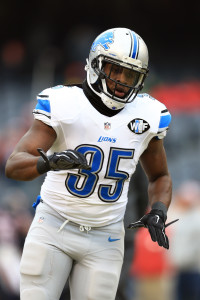 Bell signed with Chicago in September but totaled just three carries in his four appearances with the Bears. The 30-year-old back sat on the open market for a few months after being cut by the Lions back in February. He had refused to accept a pay cut from Detroit, which led to his release.

Bell averaged just 3.5 yards per carry in 2015, the lowest of his career. However, he has a history of productivity and has shown that he can be a fairly effective runner and very strong receiver out of the backfield when given the opportunity. Before Theo Riddick was doing damage as a pass-catching back in the Lions’ offense, it was Bell who was making things happen with his hands. In his first two seasons with Detroit, Bell averaged 52 catches for 516 yards.

The Packers’ backfield has been a mess this season, and although James Starks returned to practice this week, Green Bay is clearly in need of more talent. Josh Alper of Pro Football Talk summarizes the Packers’ running back woes this year, noting that injuries to Starks and Eddie Lacy have led the team to trade for Knile Davis–whom the team cut earlier this week–elevate Don Jackson from the practice squad and use wide receivers Ty Montgomery and Randall Cobb out of the backfield at times. Green Bay ranks 19th in the league in rushing yards per game.