The Saints are signing linebacker Sam Barrington, according to Alex Marvez of The Sporting News (on Twitter). Barrington has been looking for work since being cut by Kansas City last week. 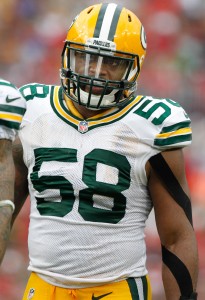 Barrington will help to provide depth after the Saints placed linebacker James Laurinaitis on injured reserve. The Laurinaitis shutdown allowed New Orleans to activate rookie Sheldon Rankins, but they were left thin when it comes to true linebackers. Before Barrington, the Saints had Craig Robertson, Michael Mauti, Dannell Ellerbe, Nathan Stupar, and Stephone Anthony in the LB group. Now, they once again have one reserve for each starter.

Barrington spent the first three seasons of his career with the Packers but he was waived earlier this year, leading him to the Chiefs. In Kansas City, Barrington made only two appearances on the year. He’s hoping to again see the kind of burn he got in 2014 with Green Bay when he suited up for 14 games and made seven starts in 2014.