The Dolphins’ most consistent receiver during the middle portion of this decade, Jarvis Landry looks to be a candidate to sign an extension during the offseason. 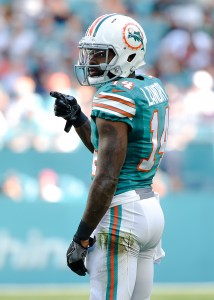 Landry is finishing up the third season of his four-year rookie contract, one that does not contain a fifth-year option since he arrived as a second-round pick as part of a deep 2014 receiver class, and Barry Jackson of the Miami Herald notes the Dolphins are going to allocate money for an extension for their slot receiver.

Miami won’t do any extensions until after the season, per Jackson. But the team will be carrying over some additional cap room from 2016 — which will inflate the total of space in 2017 to at least $36MM, Jackson notes — to aid in re-up talks.

This offseason brought a domino effect for second-tier wide receiver extensions, with Allen Hurns, Keenan Allen, Doug Baldwin, Tavon Austin and Emmanuel Sanders inking new deals, but next year could bring a summer more in line with what occurred in 2015 — when several top-flight wideouts (Julio Jones, A.J. Green, Dez Bryant and Demaryius Thomas) signed re-ups with the franchises that drafted them in the first round.

Odell Beckham, Mike Evans, Sammy Watkins, Allen Robinson, Landry and others will be extension-eligible after the season, and the results for a couple of those targets could well raise the receiver AAV ceiling Green ($15MM per year) currently occupies. Landry won’t command the same kind of deal Beckham or Evans will, but the Dolphins’ inside chain-mover stands to be in position for an eight-figure-per-year deal once talks commence due to the combination of age (24), production and the salary cap being set to rise near $170MM. The LSU product is on pace for a second consecutive 1,000-yard season, sitting at 820 yards on 75 receptions.

He might not match his 110-catch standard of 2015, but Landry’s proven to be a key component in Adam Gase‘s offense. Landry will make $893K next season. Miami’s young core of receivers mostly enters the offseason under contract, but Kenny Stills will be a UFA after this year. DeVante Parker and Stills boast 583 and 501 air yards, respectively, this season.