Although Dean Spanos on Sunday categorized himself as being closer to taking the Chargers to Los Angeles than keeping them in San Diego, he continues to exhaust options after the city voted down the team’s stadium proposal. 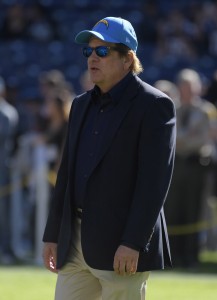 As an exercise in assessing the statuses of potential contributors to a long-sought-after new stadium, the Chargers president met with mayor Kevin Faulconer, county supervisor Ron Roberts and San Diego State Elliot Hirschman, Kevin Acee of the San Diego Union-Tribune reports. Both the Chargers and the NFL have said they require specifics from city officials before the team makes a decision on L.A., one that as of now needs to be made by Jan. 15.

Acee reports some sources familiar with Spanos’ thinking here continue to say the Inglewood move remains the better bet, but Spanos will not make a decision until after the season ends Jan. 1. Faulconer and Roger Goodell remain in talks. Goodell, though, did not speak highly of proposals coming out of San Diego or Oakland lately. After several months of dormancy, Oakland is now further along in a proposal to keep the Raiders than San Diego is to retain the Chargers after the team’s preferred plan was soundly defeated at the ballot box last month.

The Chargers are preparing to some degree on relocating, securing 3.2 acres in Costa Mesa, Calif., for what would be their headquarters if they moved, Scott Reid of the Orange County Register reports. They are also working with Costa Mesa city officials to secure permits for practice fields nearby, per Reid. Costa Mesa is located near Irvine, nearly 40 miles south of Los Angeles.

Spanos is expected to survey several sites for the Chargers’ Los Angeles/Orange County headquarters, with Costa Mesa expected to receive consideration to become the team’s long-term base site. The Bolts will also have offices in Inglewood in the event they move, Reid reports. However, the agreed-upon lease with the Costa Mesa site would be terminated should the Bolts stay in San Diego. This marks the second time Spanos has sought temporary headquarters in Orange County, having submitted a plan for an indoor practice facility before opting to try for a downtown-San Diego venue.

While San Diego’s now seen as the underdog here despite the Bolts’ roots being there and questions about where they would fall in the Los Angeles sports hierarchy, sources familiar with NFL relocations tell Acee a solution still exists to keep the Chargers where they are — in the nearby suburb of Mission Valley. The Chargers went around the city’s wishes for their new stadium to be located near their current venue in Mission Valley when they went all in on the downtown venture, and Spanos has long said the Mission Valley site is not a workable solution. But some around the league wish the Chargers president would compromise on this issue to help this last-ditch effort by the city.

Sources also told Acee a downtown stadium could work as well, only without the convention center attachment, but the Chargers might be uneasy about making another run at this after the last one fell wildly short of the required votes threshold. The San Diego-based writer added that the recent events — a strange proposal by city council members of a 99-year lease at Qualcomm featuring $1 annual payments by the Chargers, unproductive talks with the city, and Raiders fans enveloping Qualcomm on Sunday in a 19-16 Bolts loss — have left Spanos more despondent than he was after the seminal L.A. vote went the Rams’ way in January.

Acee maintains the NFL will find a way to keep the Chargers where they are, but concrete solutions have yet to emerge on this front with the current L.A. deadline three weeks away.