The Bills’ head coaching job is no longer an option for Anthony Lynn, but he still has an opportunity to land on his feet in this coaching cycle. Both the Chargers and Rams plan to bring Lynn in for a second interview, sources tell ESPN.com’s Josina Anderson (Twitter link). 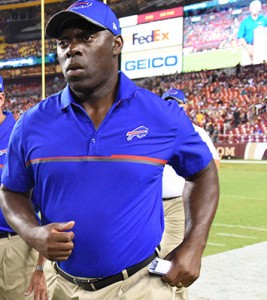 Lynn is the only coach who was tied to all six coaching vacancies this offseason, but only three jobs remain after the Bills, Broncos, and Jaguars made their hires. It’s not immediately clear if the Niners are bringing Lynn back for a second interview, but the Rams and Chargers have advanced interest in him.

On Wednesday, the Rams gave a second interview to Redskins offensive coordinator Sean McVay and he is rumored to be the team’s leading candidate at this time. However, the Rams are conducting a thorough coaching search and they will not wrap thing up without further exploring other options, including ones that could get the most out of their defense. In total, twelve candidates have interviewed for the position.

Meanwhile, Lynn is now the first coach to have a second interview scheduled with the Chargers. Patriots DC Matt Patricia, Chiefs special teams coach Dave Toub, Lions DC Teryl Austin, and Bucs DC Mike Smith are also said to be in the mix. McDermott and Vance Joseph are out of the running after accepting head coaching jobs elsewhere on Wednesday.