Defensive coordinator Vance Joseph is in the mix for five different head coaching gigs and the Dolphins have a funny feeling that he might leave the nest. With that in mind, the Dolphins are likely to promote linebackers coach Matt Burke to DC, sources tell Armando Salguero of The Miami Herald. 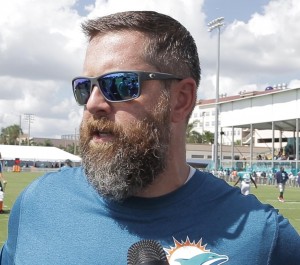 Joseph is scheduled to interview with the Broncos on Tuesday and the 49ers on Thursday. The Rams, Bills, and Chargers also have been granted permission to interview Joseph. Reportedly, he is the frontrunner for the Denver gig and he already has guys in mind to serve on his staff.

The Fins hired Burke away from the Bengals roughly one year ago today for this exact reason, Ian Rapoport of NFL.com tweets. Miami won’t be left scrambling if Joseph goes and that’s a good thing, because seems more and more likely every day that he will be someone’s else head coach in 2017.

One comment on “Dolphins Eyeing Matt Burke As Potential DC”