As they continue their search for to replace fired head coach Gus Bradley, the Jaguars will interview Cardinals offensive coordinator Harold Goodwin during the upcoming week, according to Mike Florio of Pro Football Talk. ESPN’s Adam Schefter reported earlier Sunday that Jacksonville would likely interview Goodwin, though he didn’t offer a timeline. 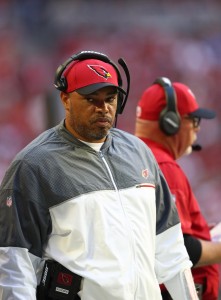 The 43-year-old Goodwin has been the Cardinals’ O-coordinator since 2013, but head coach Bruce Arians has called the plays during that four-season span. Arizona’s offense ranked just 22nd in the NFL in DVOA entering Sunday, but Goodwin is nonetheless drawing interest from multiple head coach-needy teams. Along with the Jaguars, he’s likely to interview with the Bills and Rams.

Before the Cardinals hired Goodwin, he worked as the Bears’ assistant offensive line coach from 2004-06 and then oversaw the O-lines of the Steelers and Colts. He’s now one of several known candidates for the Jaguars’ vacancy, joining interim head coach Doug Marrone, Tom Coughlin and Mike Smith, among others.