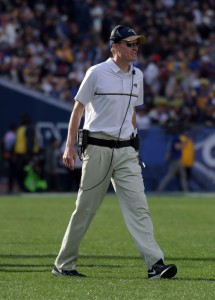 Fassel, 42, has been an NFL coach since 2005, working with special teams units during that entire period. Before joining the Rams in 2012, Fassel worked on both the Ravens and Raiders staffs in a special teams capacity. The son of former NFL head coach Jim Fassel, John has posted an 0-3 record as Los Angeles’ interim coach. Given that the Rams are thought to be targeting high-profile candidates such as Jon Gruden, Josh McDaniels, and others, it’s entirely possible that Fassel’s meeting on Monday will only be a pro forma interview.

The Rams may also express interest in Bills interim head coach Anthony Lynn, per Florio. However, Lynn is widely expected to take the Buffalo job on a full-time basis, meaning Los Angeles will have to look elsewhere.

2 comments on “Rams To Interview John Fassel On Monday”