The 49ers’ search for a head coach looks set to feature one less name and potentially the one upon which the franchise was fixated. Josh McDaniels is set to bow out of the race to focus on the Patriots’ playoff run, Ian Rapoport of NFL.com tweets. Jason La Canfora of CBS Sports also reports (on Twitter) it’s “very unlikely” McDaniels takes this job, with the 40-year-old coach set to remain with the Patriots for at least one more season. Tom Curran of CSNNE.com tweets McDaniels is indeed staying, so Tom Brady will have his OC back in the likely event he returns for his age-40 season in 2017.

McDaniels confirmed he will stay with the Patriots. “At this time, best for family and myself to remain here in New England,” he said, via Mike Reiss of ESPN.com (on Twitter). 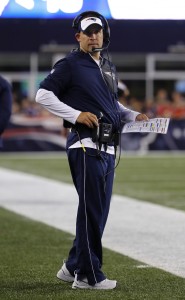 Deep into his second stint as the Patriots’ offensive play-caller, McDaniels has reservations about moving his family across the country for a job that has obviously not been stable over the past few years, La Canfora tweets. The CBS reporter refers to this (Twitter link) as a personal decision for the OC, who interviewed with the 49ers, Rams and Jaguars only to see the latter two franchises go with coaches whose teams had been eliminated. McDaniels will have coached in five straight AFC championship games since resuming his Pats post, but the 49ers were interested and willing to wait.

The reporter adds (Twitter link) the franchise is “very high” on Shanahan, who would figure to have a prestige edge on Cable due to the disparate successes of the coaches’ units this season. San Francisco is “honing in” on Shanahan, per Adam Schefter of ESPN.com (via Twitter). And the team no longer has any competition for the Atlanta play-caller’s services. But Cable making it this far into an expansive search despite Seattle’s struggles up front — with rookie-deal players and patchwork veterans — points to the former Raiders HC having impressed during his interview.

McDaniels at one point during this process viewed the 49ers job as the top position on the market, even though the franchise has cycled through coaches at a historic pace. San Francisco will have a fourth coach in four years and has now interviewed five coaches for the position.