If the Raiders are going to move to Las Vegas, they’ll have to do it without financial backing from local casino magnate Sheldon Adelson. The 83-year-old Las Vegas Sands Corp. Chairman and CEO announced Monday he’s not going to put $650MM toward a potential $1.9 billion Raiders stadium in Las Vegas. 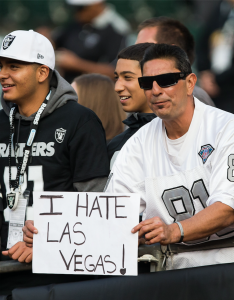 “It’s clear the Raiders have decided their path for moving to Las Vegas does not include the Adelson family,” Adelson stated (via Richard N. Velotta of the Las Vegas Review-Journal). “So, regrettably, we will no longer be involved in any facet of the stadium discussion.”

The final straw for Adelson came last Thursday, when the Raiders submitted a lease proposal that would see them pay $1 per year to play in the potential Vegas facility. That submission included no mention of Adelson, which he said “sent shock waves through our community.” Adelson is also “deeply disappointed for the disregard the Raiders showed our community partners, particularly UNLV, through the proposed agreement.”

Adelson’s decision to exit the Raiders’ stadium plan could be a death blow to the Mark Davis-owned franchise’s relocation hopes, according to the chairman of the Clark County (Nev.) Commission, Steve Sisolak.

“This is not a wrench in the wheel; the wheel fell off,” Sisolak told Riley Snyder of the Nevada Independent (Twitter link).

However, despite Sisolak’s pessimistic outlook, the Raiders have expressed confidence in the past about erecting the stadium without Adelson’s help. In fact, the team informed the NFL earlier this month that it would turn to Goldman Sachs for help if Adelson were to renege. Now that he has, the Raiders – who plan to combine with the league to commit $500MM to the stadium (with another $750MM coming in public money) – will have to seek the global investment company’s aid.

The league’s owners are scheduled to vote on the Raiders’ relocation plan in March. If 23 of Davis’ 31 colleagues approve, and if he finds a replacement for Adelson, the Raiders will head to Sin City in the near future.