The Rams hired the youngest head coach in NFL history and will supplement him with one of the most experienced coordinators in football. Wade Phillips agreed to become Los Angeles’ next defensive coordinator, Adam Schefter of ESPN.com tweets. 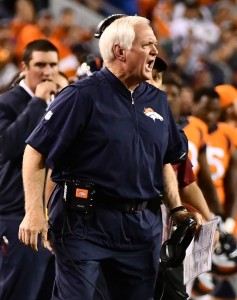 The first of the two teams to relocate to Los Angeles moved swiftly on a busy NFL day in its second-biggest market. Phillips drew interest from the Redskins and Browns and to some degree the Broncos but will head west to run Sean McVay‘s defense, although he did not officially interview for any position. Phillips will relocate to L.A. after further elevating his stature in the game following a memorable two-year stint in Denver.

A McVay hire meant the Rams were going to push for Phillips, whom the 30-year-old head coach sought as his DC. Phillips will be 70 next season but proved to be a coveted free agent after his two-year contract with the Broncos expired. The nomadic DC and former head coach took the Broncos’ defense to a higher level, turning a talented group into one of the premier units in modern NFL history. Denver ranked first in DVOA in both 2015 and ’16 under Phillips and put together dominant defensive displays to win the AFC title game and Super Bowl 50.

The Broncos and Phillips couldn’t come to terms on an extension last summer, and the team is thought to be considering secondary coach Joe Woods for the now-vacant DC job, Mike Klis of 9News tweets. Woods coached with new HC Vance Joseph in Houston, along with Phillips. This will be the NFL veteran assistant’s ninth DC job, the first coming back in 1981 with the Saints. McVay was born in 1986, creating an interesting dynamic for a Los Angeles defense that ranked ninth this season.

It remains to be seen if Phillips will continue Gregg Williams‘ 4-3 scheme or use the 3-4 he utilized in Denver. Phillips turned a Broncos team that previously worked out of a base 4-3 set into a 3-4, but the Rams employing probably the league’s best defensive tackle in Aaron Donald could point to the team staying in its usual alignment.

This will also mean the Super Bowl 50 champions will be without all three of the top sideline decision-makers from that season less than a year after the championship. The Broncos are amid a search for their next OC as well.

3 comments on “Rams To Hire Wade Phillips As DC”