The Ravens have lost several starters in free agency over the past few years and may be set to see more depart this year, but they appear intent on keeping at least one. Assistant general manager Eric DeCosta said from the Senior Bowl the Ravens “have to try and retain” defensive tackle Brandon Williams.” 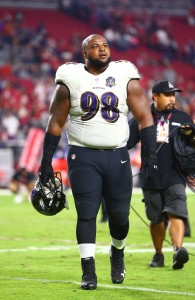 “He’s an ‘A’ player for us; he’s one of our best defensive players,” said DeCosta, who earlier this week declined a Colts GM interview request to continue with the Ravens. “He’s a rock inside. This guy can stuff the run, he can rush the quarterback, he can do everything we want him to do.”

Williams and right tackle Ricky Wagner profile as Baltimore’s top UFAs, but Wagner’s price might escalate past the Ravens’ comfort zone. Williams’ could as well, but the team has the franchise tag it could use in the meantime. Williams comprises part of a loaded defensive tackle class, with Kawann Short, Dontari Poe and Johnathan Hankins all sitting as UFAs. After Fletcher Cox‘s 2016 deal raised the AAV bar north of $17MM for DTs, this could be a pricey offseason for teams who want to acquire top talent on the defensive interior. Joel Corry of CBSSports.com projects the defensive tackle franchise tag to cost $13.468MM. The Ravens stand to possess just more than $15MM in cap space.

The soon-to-be 28-year-old Williams has started for the Ravens the past three seasons after arriving from Division II Missouri Southern. His run-stopping ability graded out well on Pro Football Focus in 2016, anchoring what the site called a top-flight run-defending front seven. The 335-pound talent doesn’t have quite the high profile of Short or Poe but is still set to cash in, and the Ravens aren’t exactly playing it coy about his importance to their team.

“[Williams] fits in with the tradition of Ravens defensive tackles and nose tackles, whether it’s Haloti [Ngata], Kelly Gregg, even going further back to Kemo [Ma’ake Kemoeatu], Sam Adams, Tony Siragusa,” DeCosta said. “Brandon’s right there with all those guys.”