A day after the Vikings announced that they’d be retaining offensive coordinator Pat Shurmur, it appears that another member of the offensive coaching staff is on his way out. Alex Marvez of The Sporting News reports (via Twitter) that the organization has fired quarterbacks coach Scott Turner. 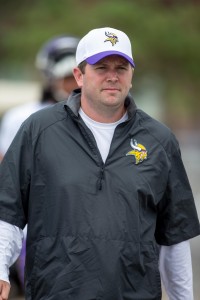 Turner, the son of long-time coach (and former Vikings offensive coordinator) Norv Turner, had a successful season in 2016 considering the circumstances. He certainly played a role in Sam Bradford‘s bounce-back season, as the former first-overall pick finished the campaign with 3,877 passing yards, 20 touchdowns, and only five interceptions. Of course, Turner was only dealing with Bradford because starter Teddy Bridgewater was lost for the season with a torn ACL. The former first-rounder’s success could also be attributed to Turner, as Bridgewater connected on nearly 65-percent of his passes during his two seasons as a starter.

Turner joined the Vikings organization in 2014. Prior to his tenure in Minnesota, the 34-year-old served as the Browns wide receivers coach and the Panthers offensive quality control coordinator.