The Vikings plan to remove the interim label from offensive coordinator Pat Shurmur, a source tells Ben Goessling of ESPN.com, meaning Shurmur will return as the club’s play-caller in 2017. Shurmur was elevated from tight ends coach to interim OC when Norv Turner resigned his position on November 2. 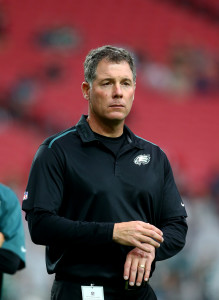 After Shurmur took over as the offensive coordinator, Minnesota averaged 332 yards per game in nine contests, an improvement over the 293 yards per game the club averaged under Turner. Sam Bradford, too, played relatively well under Shurmur, posting the all-time NFL record for completion percentage while (admittedly) throwing to an extremely short average depth of target. By weighted DVOA — which places more emphasis on more recent games — the Vikings actually (slightly) regressed under Shurmur, as they finished 27th in wDVOA as opposed to 26th in straight DVOA.

Shurmur, 51, has been an NFL coach since 1999, and is now on his third stint as a coordinator. Previously a play-caller for both the Rams and Eagles, Shurmur also served as head coach of the Browns from 2011-12, and had a short tenure as the Eagles’ interim head coach at the tail end of the 2015 campaign.

One comment on “Vikings To Retain OC Pat Shurmur”