Former Alabama linebacker Reuben Foster recently had right rotator cuff surgery, a league source tells Adam Caplan of ESPN.com (on Twitter). Teams have been informed of the operation. The good news is that Foster is projected to be cleared for action in about four months, which means he should be ready before training camp in July. Unfortunately, however, he’ll be unable to participate in drills during the draft combine (Twitter links). 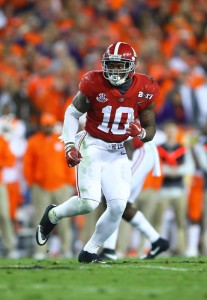 Back in January, one scout told Matt Miller of Bleacher Report that Foster has a “perfect grade” on his board. Opinions vary on the Alabama product, but he is widely projected as a first-round pick with many prognosticators saying that he could go inside of the Top 10. Foster, who had five sacks in 2016, is regarded as an exceptionally well-rounded prospect and most see him as the best inside linebacker in this year’s crop.

In other draft news, Texas Tech QB Patrick Mahomes could reportedly go in the Top 3 and Washington wide receiver John Ross is expected to undergo surgery after the combine. Meanwhile, some are saying that Alabama’s Cam Robinson is no longer the top offensive tackle in this year’s draft.