The Eagles need help at wide receiver and they have a big name in mind. If he reaches the open market, the Eagles will pursue Dolphins receiver Kenny Stills, a source tells Eliot Shorr-Parks of NJ.com. 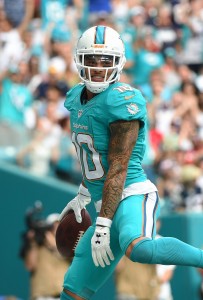 Stills, 25 in April, is eligible for free agency at a time when Miami also has to consider Jarvis Landry‘s long-term future. Landry, the team’s No. 1 receiving option, will be out of contract after the 2017 season. The Dolphins could opt to let Stills go to maintain room for Landry in the long run, but the team also has a good amount of cap space to work with at the moment. As of this writing, the Fins have ~$29MM in projected cap space. The Dolphins also have DeVante Parker and 2016 draft pick Leonte Carroo on the depth chart.

The Dolphins are on record as saying they would like to retain Stills.