Falcons secondary coach/senior defensive assistant Marquand Manuel will be promoted to defensive coordinator, a source tells Vaughn McClure of ESPN.com. He replaces Richard Smith after he was let go earlier this week. 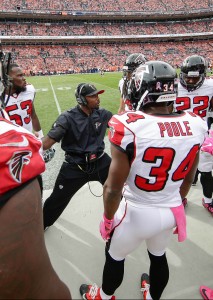 Manuel, 37, doesn’t boast any play-calling experience, but did interview for the Jaguars’ coordinator gig last offseason. Atlanta passing game coordinator Jerome Henderson, linebackers coach Jeff Ulbrich, and receivers coach Raheem Morris were also thought to be potential candidates for the job. Morris boasts head coaching experience, but the Falcons are giving the opportunity to the younger Manuel, who was an active football player as recently as 2010.

This past season, Atlanta ranked just 27th in defensive DVOA and Manuel will be charged with turning things around. The team will also have a new coordinator on the other side of the ball in Steve Sarkisian.