A number of clubs have already expressed interest in pending free agent tackle Russell Okung, including the Giants, Jets, Chargers, and Vikings, according to Jason La Canfora of CBSSports.com (Twitter link). 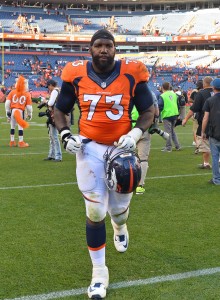 The Broncos last week declined a $1MM option bonus that would have locked in an additional four years, $48MM, and $20.5MM in guarantees for Okung. Okung notably negotiated his Denver contract without the assistance of an agent, and the deal — which contained no guaranteed money at the outset — was widely panned. It’s unclear if Okung plans to broker his next pact by himself or enlist some sort of representation.

Okung, whom PFR rated as the third-best offensive tackle available on the open market, isn’t an elite blindside protector, but he’s a capable option that would represent an upgrade for the teams listed by La Canfora. The Jets and Vikings essentially have no left tackle at the moment, and the internal options they could respectively re-sign (Ben Ijalana, Matt Kalil) are unimpressive. The Giants, meanwhile, are trying to improve upon third-year pro Ereck Flowers, while the Chargers want to find a better left tackle than King Dunlap.

Although he turned in his first career 16-game season, Okung graded as just the No. 38 tackle in the NFL last year, according to Pro Football Focus. Okung, 29, drew a dreadful 55.0 score for his pass blocking, though his 79.7 run blocking grade was the 21st best showing in the league in 2016.