All deals are contingent on players passing a physical exam, but it is often just a formality. In the case of tight end Julius Thomas, who has missed eleven games in the past two years, the physical was nothing to be scoffed at. On Tuesday, Thomas was given a clean bill of health by doctors, paving the way for a deal to be finalized between the Jaguars and Dolphins on the first day of the league year, Armando Salguero of the Miami Herald writes. 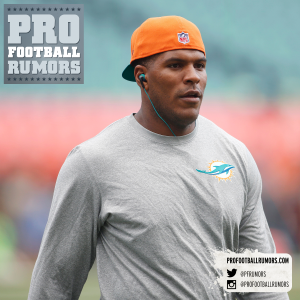 Teams cannot officially make trades until March 9, but everything is now in place for the swap to go through. The intra-state deal will send the tight end to Miami in exchange for a 2017 seventh-round pick. Then, in a separate deal, left tackle Branden Albert will go to Jacksonville in exchange for a 2018 seventh-round pick. Initially, it looked like the veterans would be exchanged within the same trade. Effectively, of course, they are being traded for one another.

Thomas has a history with Dolphins head coach Adam Gase and he is expected to pick up the offense rather quickly. If he can stay healthy, he could prove to be a serious weapon for Miami. Between 2013 and 2014, Thomas tallied 108 catches and 24 touchdowns under Gase’s guidance. Meanwhile, the Jaguars have secured their replacement for left tackle Kelvin Beachum, though Albert comes with plenty of question marks himself.