The Raiders are not expected to re-sign running back Latavius Murray before free agency opens on March 9, Josina Anderson of ESPN.com tweets. Anderson notes that the club is willing to bring him back after he tests the open market. 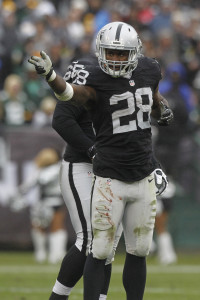 Oakland selected Murray in the sixth round of the 2013 draft, but he did not see consistent playing time until 2015, when he became the first Raider since Darren McFadden in 2010 to surpass 1,000 rushing yards. In 2016, he amassed just 788 yards rushing as rookies Jalen Richard and DeAndre Washington ate into his workload. Both Richard and Washington surpassed 400 rushing yards and averaged over five yards per carry, as opposed to Murray’s more pedestrian four yards per carry (though Murray did rush for 12 touchdowns last season).

Murray’s 4.0 YPC average matched his 2015 figure, so he is not viewed as a particularly explosive back. Nonetheless, he will certainly have a market, as teams like the Giants, Buccaneers, and Vikings could be in need of a medium- or long-term backfield solution. Plus, Murray has less wear and tear than other backs who have entered free agency in recent years, with only 543 career carries. The Eagles have also been named as a potential destination for the UCF product.

The Raiders did engage in contract talks with Murray last month, but obviously those talks did not lead to a new deal. And while Oakland would be open to re-signing him later in the offseason, Anderson tweets that the club is focused on long-term deals for Derek Carr and Khalil Mack, and the team is also aware that this year’s draft is deep at running back. As such, it sounds like the Raiders would be happy to let Murray walk and allow Richard, Washington, and a rookie back carry the load moving forward.

PFR recently ranked Murray as the fourth-best running back eligible for free agency this year.