The 49ers will sign Brian Hoyer, according to Ian Rapoport of NFL.com (on Twitter). Hoyer’s role is not immediately clear, but it’s at least possible that he may be San Francisco’s starter in 2017. It’s a two-year deal, tweets Albert Breer of TheMMQB.com. The pact contains base salaries of $6MM in each season and $10MM in guarantees, per Jason La Canfora of CBS Sports. With potential incentives factored in, Hoyer could make up to $9MM per year (Twitter link). 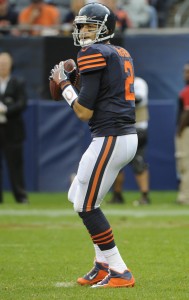 The Jets also had interest in Hoyer, but it seems that his relationship with coach Kyle Shanahan helped push him to San Francisco. The incumbent Bears and the Bills also had some level of interest in him. The Bears probably backed off as their pursuit of Mike Glennon gained steam and the Bills came off the board when they worked out a restructured deal with Tyrod Taylor.

Hoyer and Shanahan worked together on the 2014 Browns, who finished with the moribund franchise’s best record since 2007. Hoyer’s per-pass numbers were better with the Texans and Bears, respectively, but his longest audition as a starter came for a Cleveland team that didn’t have Josh Gordon‘s services, for the most part. The Cleveland-area native threw for more than 3,000 yards for the only time in his career and tossed 12 touchdown passes.

In Chicago, Hoyer threw four 300-yard games last season before suffering a season-ending injury, and he guided the Texans to the playoffs in 2015 despite being embroiled in a strange quarterback controversy with Ryan Mallett for part of the year. His arrival in San Francisco could signal the 49ers leaning toward taking a quarterback in the draft. Numerous passers — headlined by Kirk Cousins — were believed to be on the 49ers’ radar, but Hoyer looks to be a bridge starter in the meantime. Washington slapped the exclusive franchise tag on Cousins, so a trade would be the only scenario in which San Francisco could acquire him this year. But Cousins could be a 2018 UFA, and a Hoyer deal would line up with a possible Shanahan pursuit of another former pupil next year.

Hoyer went 1-4 in five Bears starts last year but 5-4 with the ’15 Texans and guided the Browns to all seven of their wins a year prior.