The Bears announced that they’ve re-signed linebacker Christian Jones to a one-year deal. Jones was a restricted free agent, so Chicago presumably inked him for something less than the $1.797MM original round RFA tender. 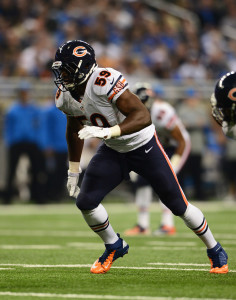 Jones, 26, was a full-time starter for the Bears as recently as 2015, when he started 15 games for the club. That year, he played over 70% of Chicago’s defensive plays and picked up 59 tackles. But when the Bears signed veteran ‘backers Danny Trevathan and Jerrell Freeman last offseason, Jones lost his starting gig.

The Bears shopped Jones before last season, but after not finding any takers, they placed Jones in a special teams role. Although he appeared in all 16 games in 2016, Jones only started two contests, instead picking up most of his playing time through 323 special teams snaps. He posted five tackles in that space, and will likely continue on as a special teamer in 2017.