The Browns are very interested in Ravens free agent fullback Kyle Juszczyk, sources tell Adam Schefter of ESPN.com (on Twitter). Meanwhile, the expectation is that Juszczyk will wind leaving Baltimore as the Ravens are not prepared to match what he’ll get elsewhere, according to ESPN.com’s Adam Caplan (Twitter links). Meanwhile, Juszczyk will look to sign with a team that will allow him to do more than play fullback. 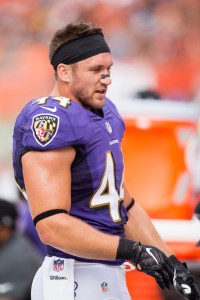 Pro Football Focus’ No. 1-rated fullback in 2016, Juszczyk is reportedly looking to sign with a team that will deploy him in a hybrid fullback/tight end role. He has 97 career receptions for 769 yards and five touchdowns. The former fourth-round pick started three seasons for the Ravens and earned his first Pro Bowl nod in 2016.

The Ravens were attempting to retain him as recently as Monday, and the league’s highest-paid fullback — the Chiefs’ Anthony Sherman — makes just $2.1MM per season. But if the fifth-year blocker is seeking a tight end role as well, the fullback AAV bar could soon be raised.

The Browns, of course, lead the league in cap room, entering Monday with a league-record $102MM in space. Cleveland boasts needs across the board but has a proven tight end locked up long-term in Gary Barnidge. Baltimore holds $12.5MM in cap space, the fourth-fewest mark in the league.