Colin Kaepernick has officially opted out of his contract with the 49ers, according to Adam Caplan of ESPN (Twitter link). Kaepernick hired new representation – agents Jeff Nalley and Sean Kiernan of the Select Sports Group – and they informed all 32 teams in the league of his decision earlier this week. 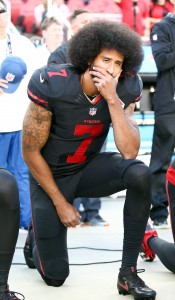 Kaepernick reached out to new general manager John Lynch right after he was hired and met with him and new head coach Kyle Shanahan in late February. The talk, apparently, did not give Kaepernick the sense that he would be the team’s starting quarterback in 2017. While Kaepernick had the option of staying or leaving, the 49ers have been widely connected to other QBs and it’s quite possible they would have released him anyway to avoid a $14.9MM cap charge.

No. 7 will now join a free agent class that includes quarterbacks like Mike Glennon, Ryan Fitzpatrick, Nick Foles, and Brian Hoyer. We could see more additions in the coming days, of course, like Tony Romo, Jay Cutler, and Tyrod Taylor.

57 comments on “Colin Kaepernick Opts Out Of 49ers Deal”