Free agent wide receiver Kamar Aiken is visiting the Colts today, a source tells Ian Rapoport of NFL.com (on Twitter). If he doesn’t sign right away, Aiken will then travel to Seattle to meet with the Seahawks on Monday. 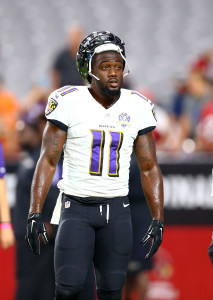 Aiken, 28 in May, had only 29 receptions for the Ravens in 2016 after putting up 75 catches the year prior. Still, we had Aiken ranked as one of the 15 best available receivers heading into free agency, slotting him ahead of notables like Victor Cruz, Brian Quick, Brandon LaFell, Anquan Boldin, Ted Ginn, and Vincent Jackson. When we update the offensive positional rankings later today, Aiken will be at or near the top of the WR list.

We haven’t heard a lot about Aiken in the last week or so, but it sounds like his market is starting to pick up. Baltimore may or may not be looking to bring him back, but we do know that the team has been looking to fortify its wide receiver group. The Ravens thought they were close to a deal with Torrey Smith until he chose the Eagles instead.

The Colts wouldn’t give Aiken a clear path to playing time with T.Y. Hilton, Donte Moncrief, and Phillip Dorsett already on the roster. The Seahawks, meanwhile, have Doug Baldwin, Tyler Lockett, Paul Richardson, and Jermaine Kearse in their top four spots. Seattle could give Aiken a better opportunity to occupy a WR3 role.

One comment on “Colts, Seahawks Meeting With Kamar Aiken”