Refuting a previous report, the Cowboys do not have interest in free agent wide receiver DeSean Jackson, tweets Clarence Hill of the Star-Telegram, who notes Jackson is likely outside Dallas’ price range. 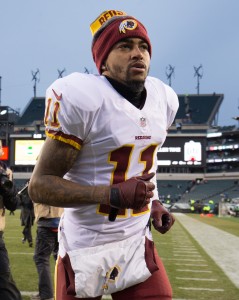 Even after restructuring several contracts, the Cowboys still have less than $9MM in cap space, so they’re not expected to be aggressive in free agency. Indeed, Hill reported yesterday that Dallas is bracing to lose many of its own internal free agents, including Terrance Williams, Barry Church, and Morris Claiborne. However, Mike Florio of Pro Football Talk did indicate today the Cowboys are expected to pursue free agent wideout Kenny Britt.

Jackson, 30, has already developed quite a market for himself, as the Buccaneers, Eagles, and Patriots are expected to be in on the 30-year pass-catcher this week. Jackson, who last year led the league in yards per reception for the second time in three seasons, ranks as PFR’s No. 26 free agent.