After two upper-echelon UFA wide receivers came off the market today in Brandon Marshall and Pierre Garcon, the Dolphins are moving to retain their top remaining free agent. Miami made an offer to UFA wideout Kenny Stills, CBSSports.com’s Jason La Canfora tweets. The Dolphins’ offer is believed to be in the $8MM-per-year range, La Canfora notes. They’re one of at least three teams in the mix for Stills’ services, per Ian Rapoport of NFL.com (Twitter link). 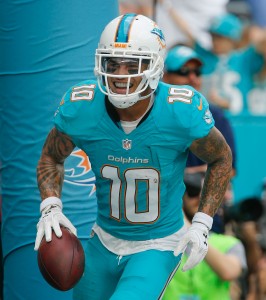 This might not be enough to retain the 24-year-old deep threat, with reports he could land a deal in the $12MM-AAV realm. But Miami has shown interest in keeping its downfield target, and such an acquisition would solidify Adam Gase‘s passing attack. Jarvis Landry has one more season left on his deal, and DeVante Parker is under team control for the foreseeable future. Former Gase success story Julius Thomas now resides in this offense.

Stills caught 42 passes for 726 yards and a career-high nine touchdowns in 2016. He joins DeSean Jackson and Torrey Smith as key long-range receiving options on the market. But Stills is much younger; he’ll only turn 25 this year. Stills resides as PFR’s No. 3 overall free agent.

Miami is also still interested in retaining UFA tight end Dion Sims, Armando Salguero of the Miami Herald tweets. This comes after a late-February report indicated the Fins wanted to keep Sims. Thomas has been notoriously injury-prone during his six-year career, so Sims could represent some level of insurance for the Dolphins as they move forward with the former Broncos Pro Bowler.

Miami re-signed Andre Branch this afternoon, putting Stills at the top of the Dolphins’ queue.

One comment on “Dolphins Make Offer To Kenny Stills”