The 49ers are expected to sign fullback Kyle Juszczyk, according to Adam Schefter of ESPN.com (on Twitter). It’s a four-year contract worth $21MM ($10.5MM guaranteed), according to ESPN’s Treavor Scales (via Twitter). Juszczyk was my No. 1 rated free agent fullback this year and was pretty much universally regarded as the best FB out there. 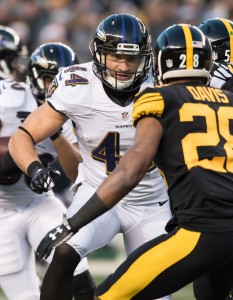 Pro Football Focus graded Juszczyk as its No. 1 fullback in the NFL in 2016. The fullback has shown to be particularly elite in the passing game, with PFF appreciating his receiving and pass blocking skills. Of course, Juszczyk still ranks in the top-10 for rushing and run blocking.

The 25-year-old (26 in April) has 97 career receptions for 769 yards and five touchdowns. The former fourth-rounder has spent his entire four year career in Baltimore. He’s gotten more involved in the passing game over the past two years, including a standout 2015 campaign where the Harvard product caught 41 passes.