The Jets are hosting fullback Zach Line on a visit, according to Tom Pelissero of USA Today (on Twitter). Now that Kyle Juszczyk, Patrick DiMarco, and James Develin are off the board, we have Line as the second-ranked free agent fullback left in free agency. 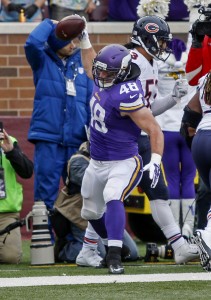 Line has appeared in all but one of the Vikings’ regular season games in the last two years and has spent the last four seasons with Minnesota. The 6’1″, 230 pounder has a grand total of 13 carries and seven receptions over the course of his career, but can be a difference-maker when it comes to blocking.

Line graded out as the league’s 12th best fullback last year, according to Pro Football Focus, though only 17 fullbacks played enough to qualify for their rankings. Line had roughly even grades for run blocking and pass blocking in his 211 snaps.

The Jets, in theory, could make two additions in the backfield today if they sign Line and Travaris Cadet. Cadet is currently deciding between Gang Green and the Saints.