The Panthers are expected to make a run at free agent safety Barry Church when the market opens on Thursday, according to Bill Voth of the Black and Blue Review. 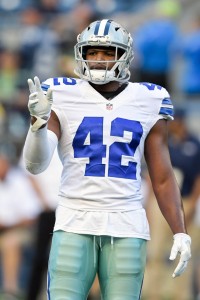 Church, 29, is coming off the best season of his career, during which he posted two interceptions and graded as the league’s No. 11 safety, per Pro Football Focus. As Andy Benoit of Sports Illustrated recently noted, Church is “solid at everything, great at nothing,” but looks like one of the best safeties on the 2017 free agent market. PFR ranked Church as the third-best available safety in our positional rankings, while listing him as the No. 33 overall free agent on a macro level.

Earlier today, Charles Robinson of Yahoo! Sports reported Carolina figures to address the secondary in a “meaningful way,” and adding Church to a safety group that already includes Kurt Coleman and Tre Boston would do just that. Coleman and Boston graded as league-average defensive backs in 2016, so reducing one or both of their snaps in order to accommodate Church is a tenable idea. Per Robinson, Church is expected to garner north of $5MM on his next contract.

Church has spent the first seven seasons of his NFL tenure with the Cowboys, and is open to accepting something of a hometown discount to stay in Dallas. However, now that he’s just days from hitting free agency, Church figures to see what the open market has to offer as he competes with fellow safeties Tony Jefferson, Duron Harmon, Darius Butler, and Jonathan Cyprien for free agent funds.