The Patriots reached an agreement with one of their UFAs on Monday, securing a commitment from fullback James Develin, Jeff Howe of the Boston Herald reports (on Twitter). It’s a two-year deal for the sixth-year contributor, per Howe. The pact is worth up to $2.85MM and comes with a $300K signing bonus, according to Mike Reiss of ESPN.com. It also features $500K in guarantees, tweets Ben Volin of the Boston Globe. 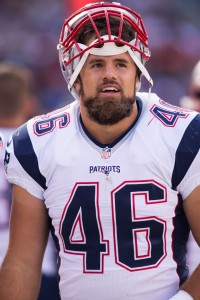 The sides made progress in coming to an agreement on Friday, Howe reports. Develin’s played his entire career in New England, helping the Patriots on special teams and offense. He has just 13 career receptions and seven career carries but played on 31.3 percent of the Patriots’ offensive plays last season and just more than 33 percent of their special teams sequences.

Entering the week with nearly $62MM in cap space, the Patriots have several other free agents that are higher-profile players — Martellus Bennett, Dont’a Hightower, LeGarrette Blount, Jabaal Sheard, etc. — but they locked down one who has delivered three 16-game seasons and one that won’t end up costing much to keep.