Now we have two teams that reportedly won’t go near Oklahoma running back Joe Mixon. The Patriots will not even consider drafting him, according to a source who spoke with Jeff Howe of The Boston Herald. 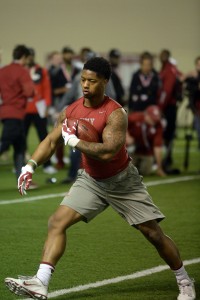 Earlier this week, we learned that the Dolphins have also removed Mixon from consideration. Of course, it’s easy to take Mixon off the board when you already have talent at the running back position and that’s the case for both AFC East clubs. The Dolphins have Jay Ajayi and Kenyan Drake on the depth chart while the Patriots have plenty of depth with free agent pickup Rex Burkhead, James White, Dion Lewis, and DJ Foster.

For other teams looking for an impact player in the backfield, the moral conundrum isn’t quite as easy to sort out. Mixon, despite his red flags and potential for a PR nightmare, is one of the most talented running backs in this year’s class. The Sooners star could be available after Leonard Fournette, D’Onta Foreman, Dalvin Cook, and Christian McCaffrey are all off the board. In terms of talent, one could argue that he offers higher upside than at least two of those well-regarded backs.

When asked about Mixon this week, Patriots owner Robert Kraft declined to speak specifically about him, but he did reiterate his stance against domestic violence.

“While I believe in second chances and giving players an opportunity for redemption, I also believe that playing in the NFL is a privilege, not a right,” Kraft said. “For me, personally, I believe that privilege is lost for men who have a history of abusing women.”