Former Bengals tackle Andrew Whitworth is expected to sign with the Rams today, according to Adam Schefter of ESPN.com (on Twitter). In terms of talent, I had the veteran ranked as the top tackle on the open market. 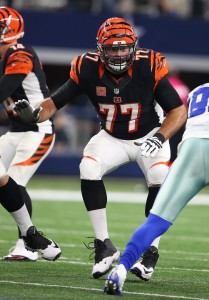 It’s a three-year, $36MM deal with $15MM guaranteed, Schefter tweets. That also includes $2.5MM guaranteed for year two of the deal. The cash flow seems favorable as Whitworth is ticketed for $24.5MM through the first two years, Ian Rapoport of NFL.com tweets.

This will result in former No. 2 overall pick Greg Robinson sliding inside to guard, Rapoport tweets. Under interim coach John Fassel, the Rams were exploring this idea. They’ll now follow through with it under Sean McVay in what seems like a last-ditch move to try and salvage Robinson’s career with the franchise.

Whitworth spent some time at guard last season but he’s likely going to play on the outside in L.A. Offensive line was one of the Rams’ major areas of need this offseason and they have found themselves a major piece to group with Rodger Saffold and Rob Havenstein. Now, rising sophomore quarterback Jared Goff should have much better pocket protection. Whitworth’s 92.5 score for pass blocking on Pro Football Focus led all tackles last season.

Whitworth, 35, spent his entire 11-year career in Cincinnati until now. He’s been remarkably durable, missing only two games since the start of the 2009 season. In 2016, PFF rated him as the second-best tackle in the entire NFL and he’s been a Top 5/Top 10 guy for the last five years in a row.

The former first-rounder has started 71 games during his five-year career.