Tyson Alualu is visiting with the Steelers, a source tells Jeremy Fowler of ESPN.com (on Twitter). The Jaguars free agent defensive lineman will touch down in Pittsburgh on Monday afternoon. 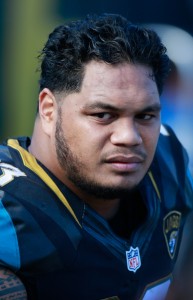 Our most recent rundown of free agent defensive tackles had Alualu in the top 15, but only by a thread. Despite spending his entire career with the Jaguars, Alualu was on the Jags’ roster bubble heading into the 2016 season. This year, the Jaguars let him test free agency without much of a battle to keep him and it’s not clear if they have interest in re-signing him at this juncture.

Last year, Alualu appeared in 14 games with ten starts. He had 2.5 sacks and 36 total tackles and finished out as the No. 74 DT in the league by Pro Football Focus’ measure. His 47.0 overall grade was the result of a poor pass rush grade and a mediocre showing against the run. PFF has had the 29-year-old (30 in May) roughly in that range for his entire career.

The Honolulu, Hawaii native might not be a game-changer, but he could be a useful reserve for Pittsburgh thanks to his experience on both the interior and exterior of the D-Line. Right now, the Steelers have only three D-Line reserves under contract: defensive tackles Daniel McCullers and Johnny Maxey plus defensive end Leterrius Walton. Cameron Heyward and Stephon Tuitt are slated to start on the ends with Javon Hargrave in between.