Colin Kaepernick is still without an NFL job and there is no sign of that changing in the immediate future. Apparently, teams are concerned about more than just his polarizing political views. Some teams are unsure about his commitment to football and are concerned about his vegan diet, Matt Maiocco of NBC Sports Bay Area tweets. 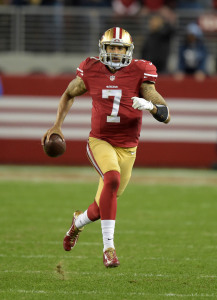 [RELATED: Another Theory On The NFL’s Lack Of Kaepernick Interest]

As Albert Breer of The MMQB alluded to earlier this month, Kaepernick was under his usual playing weight last season due to his meatless diet. The quarterback weighed in around 218 pounds, down from his usual 235-240 range. As a result, Niners coaches felt they were limited in how they could use him. With less weight on his body, they felt that he could not absorb the big hits that come from designed QB runs. For what it’s worth, Maiocco (Twitter link) hears that Kaep is back to his pre-injury weight, which might mean that he’s at about 225 pounds.

One report from earlier this week indicated that Kaepernick is pushing for a chance to start and a salary of $9MM or more. Soon after, there was conflicting word on that front. Whatever the case may be, it’s hard to see Kaepernick getting starter consideration or money. So far this offseason, we have yet to hear of any NFL team with interest.

31 comments on “Latest On Colin Kaepernick”