Five Teams In On Terrelle Pryor

Terrelle Pryor is days away from free agency and, as expected, he’ll have a healthy market for his services. The wide receiver is drawing interest from the Giants, 49ers, Eagles, and Titans on the eve of the legal tampering period, sources tell Mary Kay Cabot of Cleveland.com. More teams could get involved and, of course, the Browns are working hard to re-sign him. 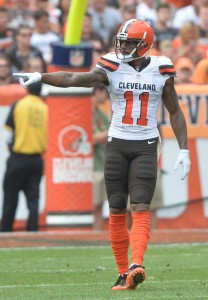 At this point, the Browns and Pryor are far apart in negotiations, Cabot hears. agent Drew Rosenhaus is looking for Pryor to get paid like one of the top receivers in the NFL. After Rosenhaus blew the ceiling off of the WR market with Antonio Brown‘s new deal, there could be a domino effect that aids the Ohio State product. Still, a deal that puts Pryor in the top five at his position in terms of compensation would be a shocker.

Pryor is firmly in the top tier of available receivers this offseason, along with Alshon Jeffery of the Bears and Kenny Stills of the Dolphins. Our most recent rankings have Pryor as the second-best WR on the market, behind Jeffery and ahead of Stills. Despite Rosenhaus’ ambitions, I still see Stills as having more earning power than Pryor.

The Giants are in the market for a receiver after parting ways with Victor Cruz and a player like Pryor would help deflect attention from star Odell Beckham Jr. Still, I’d be surprised if they were able to keep up with the bidding on him. The Eagles and Titans are logical landing spots since both clubs are also in on Jeffery and a possible Brandin Cooks deal. The 49ers, like the Browns, have lots of cap space to work with.

25 comments on “Five Teams In On Terrelle Pryor”